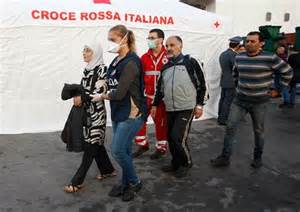 Over 100 migrants have been rescued from a small boat in the Mediterranean, Italian coast guards say.

The 12-metre boat was in difficulties in strong winds on Saturday, but coast guards managed to get the 115 on board it – including 25 children – into their own vessels and then to safety in Sicily.

On Monday, Italy rescued 142 people from a boat struggling in stormy weather off the coast of Calabria. Those migrants were said to have come from Syria.

There has been a new surge of migrant arrivals in Italy in the past week or so, despite the fact that the number of such attempts to cross the Mediterranean by boat usually decreases with the onset of winter, showing how desperate migrants are to get to Europe.

The European Union recently launched a new EU border surveillance network to try to protect the lives of migrants attempting the dangerous crossing to southern Europe.

More than 360 people died in early October in a shipwreck off the tiny Italian island of Lampedusa.