I Didn’t Donate N1billion For Fight Against Covid-19: Peter Obi

Japan has begun clinical trials to test the effectiveness of the anti-flu drug Avigan in treating patients with coronavirus,...
Read more

Wimbledon has been cancelled for because of the coronavirus pandemicThe tournament was due to be played between 29 June...
Read more

UEFA has suspended all Champions League and Europa League matches have been suspended "until further notice" because of the...
Read more

Coronavirus: Lagos, Abuja, Ogun Markets To Open Between 10:00am and 2:00pm Daily: FG

The Federal Government has made a partial u-turn on the lockdown of markets in Lagos, Ogun and the Federal...
Read more 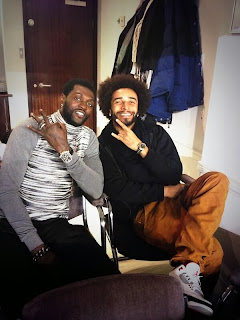 Following their loss to Liverpool ( 5- 0) at the White Hart Lane yesterday, Tottenham fans are more enraged at the moment and No it has nothing to do with their Manager, Andre Villas-Boas’ exit in fact that seems to be the best news since they’ve received since the new season began. Their anger is caused by Benoit Assou-Ekotto and Emmanuel Adebayor and want them booted out as well.

The two footballers made what seemed like a mockery of the team when they posted a picture of themselves smiling and posing, making up the number five with their fingers after they were defeated by Liverpool.

While BAE is on loan at QPR, Adebayor on the other hand played once this season. Meanwhile, Adebayor might step in as Spurs Manager.

See some reactions from fans.
(1) @tehTrunk: Hey @spursofficial can you get rid of @AssouEkotto and @E_Adebayor while you’re at it please?
(2) @LoveTheShirt: If Levy could boot Adebayor and BAE along with AVB it would help matters.

(3) @MrAlexDrummond: First order of business as the new gaffer – publicly stone Adebayor and BAE – Thats how you get the fans onside. #COYS

(4) @MetalPoisoning: @talkSPORTDrive Adebayor, Ekotto always do those hand gestures in pics. Nothing to do with 5-0 at all. What a stupid thing to say @mickquinn

(6) @MikeDay37: @AssouEkotto @E_Adebayor I hope and pray that you both never play for the club again disgraceful attitude after losing

(7) @SirAlex_K: AND you just know that plonker Adebayor will start on Wednesday now and probably score a hatrick to rub it in even more!

(8) @MattHoward123: Whoever takes over needs to sell Assou-Ekotto to QPR and physically drive Adebayor to any club that wants him. pic.twitter.com/Flwy3jPira
(9) @Glavlar: For those who haven’t seen ‘that’ picture. Classless idiots. Adebayor & Benny pose for picture after yesterdays game. http://t.co/9gqOFhqFxL