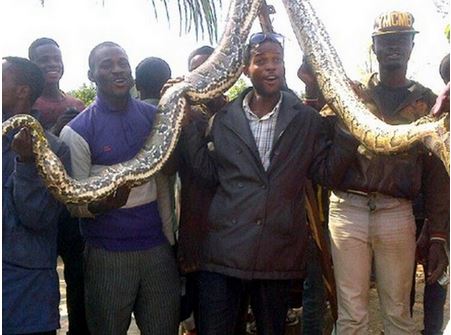 As it was gathered, the snake had been killing domestic animals, including dogs, sheep, goats and chickens.

The size of the snake attracted spectators from as far as Odo-Ado, Oke-Ila, Basiri, Nova Road and GRA in Ado-Ekiti, the state capital, to the sparsely-populated Afao road, turning it into a Mecca of sorts.

The witnesses said they had never seen anything of that kind before. They called the creature “the wonder of the year in Ekiti.”

The young farmer Ibrahim, is a cattle rearer. He saw 3 snakes in a bush and killed then with his cutlass. Then he sold all the snakes, N10,000 each.

He added that such snakes killed pets but didn’t touch people. According to him, they roll round their prey and suffocate it, until it dies.

“If you want to kill them, aim for the head and do not miss it, because if you do, it can be fatal.”

Many spectators were really shocked to see such a long and thick snake. Ajayi Adekunle said:

“You can see how big it is. Even a car cannot kill it. I urge people living in this area to be careful, as more of this snake may still be around here.”