The Economic and Financial Crimes Commission has arraigned one Fisayo Ajibola before Justice O.A Ipaye of a Lagos High Court, Ikeja, for allegedly conning one Audun Gerhardsen of some money. 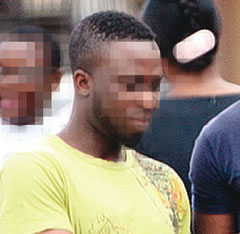 The victim thought he was dealing with a white female.

The defendant was arraigned on eight counts of possession of fraudulent documents and obtaining money by false pretence, a statement by EFCC spokesman, Wilson Uwujaren, said on Tuesday.

The EFCC said Ajibola allegedly conned Gerhardsen via Western Union, telling him that he was a white lady, Mary Morgan, based in Britain.

The commission also told the court that Ajibola also duped two other individuals in similar fashion, adding that some fraudulent documents were recovered during a raid on his home by operatives of the EFCC in Ibadan.

“That you, Fisayo Ajibola, on October 23, 2012, in Lagos within the Ikeja Judicial Division, by false pretence and with intent to defraud obtained the sum of N73,000 from one Audun Gerhardsen via Western Union with MTCN. 1507864809 by falsely representing to him that you are Mary Morgan, a white lady living in Britain which pretence you knew to be false.”

The defendant pleaded not guilty to the charges.

The prosecuting counsel, Zainab Ettu, prayed that the accused person be remanded in prison custody.

However, defence counsel, Sunday Ike, argued that the offence was bailable.

Justice Ipaye granted the accused bail in the sum of N1m with two sureties each in like sum.