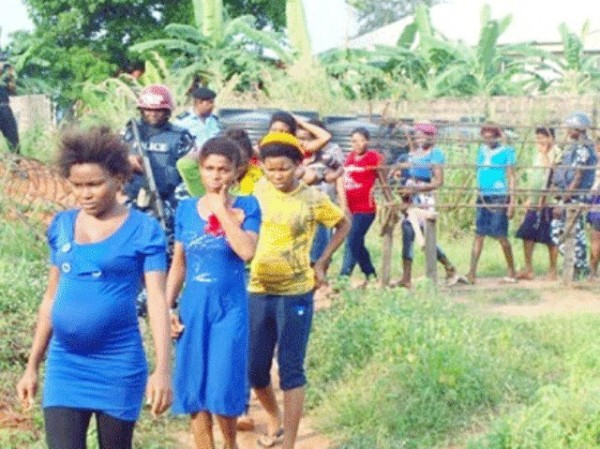 The owner of the home, Ms. Mma Achumba also owns another charity home. The lady was on the radar of the state’s security agents, in Umunkpeghi, Isialangwa local government area of the state, for a long time.

She was placed on the police’s wanted list for child-trafficking, after the state government ordered the demolition of the home.

Mr. Tilli Abubakar had a briefing with the journalists in Umuahia. He paraded the pregnant girls aged from 15 to 23 years. The girls were mainly brought to the baby factory from neighbouring states.

The raid on the baby factory was okayed after the men of the command had received the information that 19 pregnant teens and a nursing mother of a day-old baby were kept there.

The police knew that the owner, Achumba, always sneaked in at dusk and left at dawn, but the place was raided by 4 a.m., she had left.

According to the police, Achumba’s son, Uche, and his wife, who acted as resident caretakers, were arrested.

Uche, a father of four, admitted that he was aware of his mother’s activities, but said he had, at various times, warned her not to engage in the “business”.

Also paraded was one Chimere Sunday (alias Boyoyo) of Umuojima Ogbu in Osisiomangwa who allegedly collaborated with one Mrs. Uloaku Chinweuba and Ugochi Alozie, to sell his two children to an undisclosed buyer.

The CP said that after confessing, the suspect had led the police to the house of the man who bought the children, following which they were rescued.

Mr. Tilli Abubakar vowed that the whereabouts of the man who bought the children would be uncovered.

It would be recalled that in similar case at the beginning of this month, the Imo State Police command rescued 16 pregnant girls aged between 14 to 19 years from an illegal orphanage that operated in the guise of an NGO.