FIFA unveiled its official ball for the 2014 World Cup – the ‘Brazuca’. This name was given to a ball following a public vote in Brazil which involved more than one million fans. 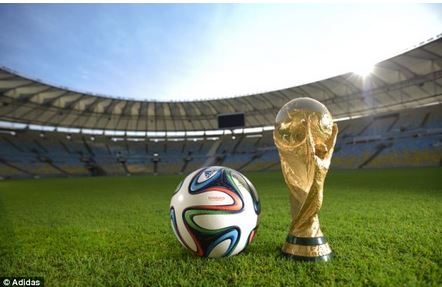 Its design is said to be “inspired by vibrant colours, passion and heritage of Brazil.” Its name is a term used by natives of the country, meaning ‘Brazilian’ or to describe the Brazilian way of life.

The ball was unveiled during a spectacular 3D event held at the iconic Parque Lage in Rio de Janeiro, but went through a rigorous two-and-a-half-year testing process which involved more than 600 of the world’s top players.

Players and Adidas testimonials such as Lionel Messi, Iker Casillas, Bastian Schweinsteiger and former France international Zinedine Zidane were all involved in the process and have since signed off on its use for next year’s World Cup.

See the photos from the presentation and tests below:

World in his hands: Lionel Messi will be hoping to lead Argentina to glory at next summer’s showpiece in Brazil

Raring to go: Brazil defender Daniel Alves insists he can’t wait to play with the new Brazuca at the World Cup

On the volley: Uruguay striker Edison Cavani gets acquainted with the new Brazuca ball