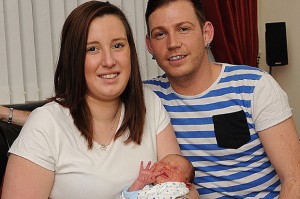 A mum’s first baby is always a momentous occasion – but the day of Chelsea Johnson’s son’s birth was made even more memorable for a very special reason.

For not only was little Landon-Jonah Johnson born on December 11, 2013, he also made a perfectly-timed entrance into the world at quarter past two in the afternoon – making the time and date of birth 11/12/13 14:15.

Chelsea, aged 21, from Rawmarsh, Rotherham, said that her son was a ‘miracle’.

“He’s a special little boy,” she said. “I can’t wait to tell him when he’s older about when he was born, and whether he realises what a coincidence it was.”

The call centre worker said she was taken to hospital originally with stomach cramps last Friday, but medics did not tell her she was officially in labour until Tuesday.

“I went in and they said I should come back for a scan. I came back and I was still having these pains – they were getting worse, so they checked everything and said I was in labour. It was my first baby so I was feeling emotional and scared.

We had been talking about the date in the morning, and laughing about it, and when I was in labour the midwife was telling me to aim for 20 past two, as the doctor was coming in at 25 past just to check on me. But then I gave one final push and he was out, bang on 2.15pm.”

Chelsea said the coincidence occurred to her shortly afterwards when nurses were confirming her son’s details.

Chelsea was accompanied during the birth at Rotherham Hospital by her mum Debbie, 45, a psychological therapist, and her birthing partner Ben Brown, 28.

“I’m looking forward to everything about being a mum. I can’t wait for him to start talking, and I can’t stop watching him! As soon as he understands he’s a miracle I’ll tell him,” happy mom says.