Pastor Chris Okotie, Sunday, showed off his exquisite designer outfit worn to the annual Grace\Karis Awards hosted by his Household of God church in Lagos.

The award ceremony was created to celebrate and financially reward distinguished persons in public life.

Spotting a suede jacket over a crisp blue shirt and a pair of trousers, Pastor Okotie regaled his two red carpet hosts by naming his designer wardrobe. 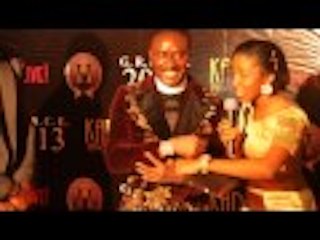 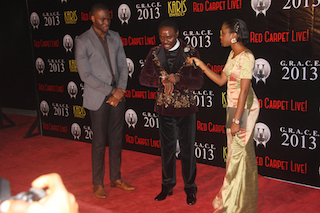 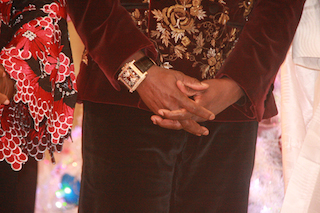 In a video, Okotie was asked by a female host, accompanied by a male, to name his outfit.

The pastor boasted his trousers were an Italian brand by Pal Zileri Cerimonia, while his watch and shoes were designed by Franck Muller and Lois Vuitton respectively, among other things.

At the point when Okotie mentioned the label of his designer wristwatch, the female host, who is also a church member, asked him to ” show the blings.”

After then, the female host said to the camera: “this is the most wonderful pastor. We are honoured to be under him and under his authority.”

Pastor Okotie has, since, 1996, used the Grace ceremony and Karis Awards to support exemplary Nigerians.

The recipient of this year’s award was Air Commodore Habiba Ruth Garba. The church celebrated her as first female one-star General in the Nigerian Air Force from the northern region of the country.

The event, which started late due to hitches from the organisers, featured a beauty pageant.

Pastor Okotie, a sometime musician and three-time presidential candidate of his Hope Party stunned his audience when he was asked to make a brief speech.

Rather than do so, he asked all the beautiful women in the church to come out and dance to his latest tunes. One of those who took to the dance floor was Queen Ure, the estranged partner of failed musician, Soul e.