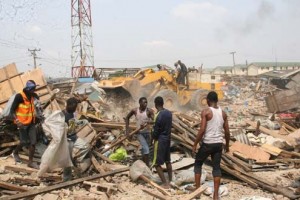 The demolition exercise commenced on Monday, as owners of the structures were accused of trespassing on its 65 hectares of land.

The day 2 exercise which commenced at about 11:00a.m. on Tuesday, was intensified, as the police officers with their bulldozers ensured that the structures were pulled down completely, but not before occupants removed their property.

Speaking to newsmen on condition of anonymity, some officers said that the Nigerian Police through the Lagos State Ministry of Physical Planning and Urban Development had issued eviction notice to the occupants on December 21, 2011.

Officers of the Nigerian Police who were sent to the community to appeal to the residents to leave the land few weeks ago were beaten by some of the occupants, Vanguard had learnt.

The development was said to have angered the Inspector General of Police, Muhammed Abubakar, who then sent more officers to the community to evict residents.