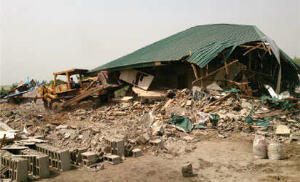 Officers of the Lagos State Command of the Nigerian Police, yesterday, demolished over 600 structures erected on 65 hectares of land in Mowo Phase II, Badagry, Olorunda Local Council Development Area, LCDA, accusing the owners of trespassing on its land.

Vanguard reports that the demolition came barely two years after the command, through the state Ministry of Physical Planning and Urban Development, issued letters to the trespassers  to vacate the land to no avail.

Sources close to the police said the order to demolish the houses was given by the Inspector General of Police, IGP, Abubakar Muhammed.

Vanguard gathered at the scene that the demolition exercise was carried out by over 200 armed policemen from Area K, led by Assistant Commissioner of Police, ACP, Ekpo Osu using five bulldozers.

The demolition began at about 10:00 am with the aim to reclaim the land said to belong to the Police from trespassers, who had been warned two weeks ago to vacate the land.

It was learnt that the 65-hectare land was acquired by the Police about 10 years ago to build houses for senior police officers and got the Certificate of Occupancy, C of O, from the Lagos State Government in 2008.

After a few years, land speculators started encroaching on the land when the authorities failed to develop the land for its specific purpose.

The residents, however, argued that a case to determine the ownership of the land was still at the Badagry High Court, Badagry.

Mr. Waheed Yakub, one of the affected residents said: “I am yet to process my C of O but I bought the land over 10 years ago  from the Opeisa family and I developed it a year after.”

Women and children were seen wailing during the exercise, claiming the notice was served only on Saturday, December 14, 2013.

In a telephone conversation, Baale of  Atinporomeh, Chief Joshua Medepo, explained that he was aware that some hectares of land were acquired under the government acquisition policy for the construction of Police staff quarters.

Medepo, however, faulted claims by the Police that his domain was part of the acquired portion just as he added that the demolition should have stopped at Age-Mowo rather than affecting  Atinporomeh.

In his response, the Akran of Badagry, Wheno Aholu Menu-Toyi, said though he was aware of the demolition, the notice given to residents by the Police authorities was short.

According to him, “I am aware of what is going on because I have been informed. Though the Police came around two years ago but could not take possession because at that time, they did not have the Certificate of Occupancy. We told them it was only when they had the C of O that they could take possession. The demolition will not affect some areas around there.”

On the short notice given to owners of the structures on the said land, the monarch said: “It is a difficult thing to say because about a year or two ago, the Police had planned to take over the place but an appeal was made to them. Though the notice given to them was very short, the notice was served on Saturday, December 14, 2013.

“I would not want to blame anybody. Those who built on acquired land should know, it is most unfortunate. Those who go about selling land tell people all sorts of lies. That is all I know.” [Vanguard]