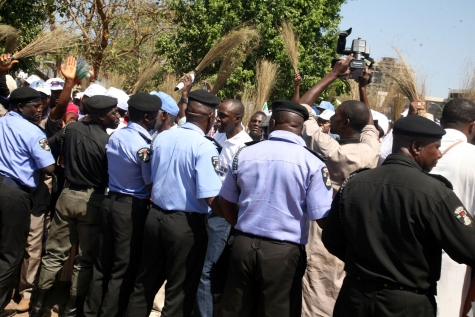 Barely 24 hours after security operatives disrupted the rally organised by the All Progressives Congress in Obio/Akpor area of Rivers State, the police have been accused by the Ikwerre Local Government chapter of the party of invading the council headquarters during its rally on Wednesday.
The APC alleged that the police shot teargas at party supporters, brutalised traditional rulers and law-abiding citizens in the area, just as it alleged that canopies, chairs and public address systems were destroyed in the process and valuables of party supporters seized at the rally.
Speaking with reporters on the incident, an APC chief in the area, Elder Chidi Wihioka, said the party had earlier informed the police in writing that the Ikwerre Local Government Chapter of APC would be visiting wards to hold rallies and sensitise the people about the party activities but lamented the ugly turn of events.
Wihioka said, “We had to converge on the Ikwerre Local Government Council to observe the arrangement of canopies, chairs and tables before I started getting calls here and there by a group.
“But we decided not to get worried because we had earlier informed the police of holding rallies in the various wards. We also expected a written response from the police. We have the right to freedom of association, but, in this case, our liberty and rights were violated by the police”.
Wihioka claimed that whenever the Grassroots Democratic Initiative (GDI), funded by Supervising Minister of Education, Nyesom Wike, holds its rallies, which he claimed sometimes were without police permit, they are given police cover but lamented that was not the case for other groups in the state.
Speaking in the same vein, the Chairman of Ikwerre Local Government Area, Mr. Welendu Amadi flayed the increasing level of hostility against members of his party and law-abiding citizens in the area.
When reached to comment on the situation, State Police Public Relations Officer, Ahmad Mohammad, a Deputy Superintendent of Police, said that he was out of the state.