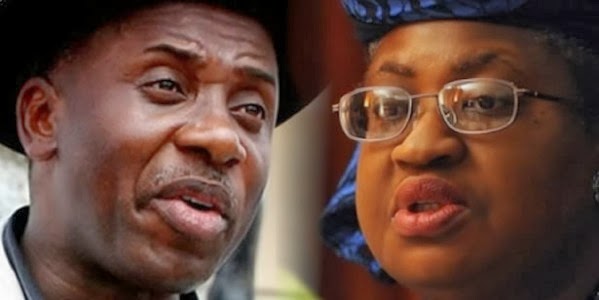 Governor Chibuike Rotimi Amaechi of Rivers State has called on the House of Representatives to probe the Minister of Finance, Ngozi Okonjo-Iweala and her counterpart in the Water Resources Ministry, Stella Ochekpe over the alleged seizure of the World Bank and African Development Bank loans approved by the National Assembly for the state.

Amaechi made this known when the House Committee on Water Resources accompanied by the Executive Directors of the Niger Delta Basin Development Authority paid him a courtesy visit at the Government House in Port Harcourt on Monday.

According to Amaechi, the State Government had fulfilled all requirements to receive and benefit from the loan scheme with the World Bank and ADB even as he added that his administration was willing to concede to the Minister of Finance the discretion to award the contract to any person of her choice provided potable drinking water is available to every citizen of the state.

“The people who are dying and deprived of the potable drinking water are Rivers people who don’t have water in their homes.

“We are prepared to allow the Minister of Finance (Ngozi Okonjo-Iweala) to award the contract to any person she wants to. We are only interested in the provision of potable drinking water for our people.

“The Minister of Finance, Ngozi Okonjo-Iweala, is using her position to undermine the safety and health of the people of Rivers State. I can’t afford to give all Rivers people bottled water, but all I can assure you is to ensure the provision of potable water.

“But the Minister of Finance has refused to release it and I think I should put that before you (House Committee on Water Resources). They want Rivers people to die”.

Earlier, Chairman of the committee, Hon. Aliyu Pategi (PDP, Niger), explained that his committee was in the state to verify the execution of various water projects in the state.