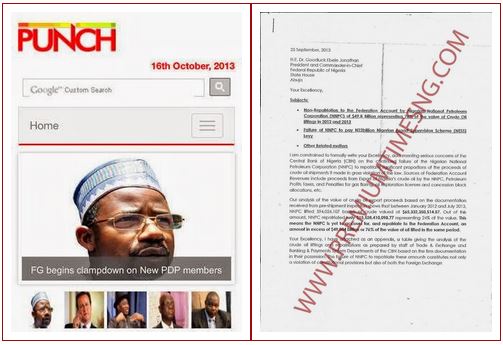 Two days ago you guys read the 18-page stinker Obasanjo wrote to President Jonathan. Well, here’s the thing, online news site Premium Times published the letter first and claimed to have exclusive rights to it. They even watermarked each page of the letter. Punch and other media houses later wrote their own reports and published unwatermarked version of the letter

Premium Times is now accusing Punch and all the other media houses of plagiarism, claiming they stole their exclusive and refused to acknowledge them.

The Editor-in Chief of the Premium Times, Dapo Olorunyomi, said

“Majority of the papers published the complete text of the letter which was first revealed to the world by this newspaper, and made available via our website. There were also cases of shameless lifting of the original story published by this medium. I am weirdly tickled at the absence of humility in competitors who sought to ignore accepting that they got the material from us and ended up failing to offer their readers the source of the material altogether.”

Punch has reacted to the allegations, insisting Premium Times was not the source of their report. See their statement after the cut…

The online news medium, Premium Times, on Thursday, falsely accused The PUNCH of republishing its version of the letter that former President Olusegun Obasanjo wrote to President Goodluck Jonathan without attribution.

We strongly repudiate this unfounded claim and deplore the online news medium’s recourse to hasty generalization in its bid to claim the moral high ground.
Premium Times was neither the source of the information used in our story nor the source of the text published.

The online medium would have avoided an “ethical flaw”, and served its readers well, if it had been careful to comply with one of journalism’s basic tenets by reaching out to The PUNCH for its side of the story.

This newspaper would have readily shared relevant information pertaining to our story, particularly, the fact that it was obtained from a source in the former President’s office on December 11, 2013 and also provided emails and PDF document containing the 18-page letter in its original form.

That an online news medium publishes a document first does not by any means suggest that it is the only medium (print or online) with the information at the point in time.

Our decision not to state the source of the story was not for the reason stated by the online medium. Indeed, Financial Times (UK) also published the story without stating its source, just like The PUNCH.

PUNCH’s culture of professionalism is its strongest forte. We provide clear attribution when stories are sourced and offer an apology when errors are brought to our notice.