Two Holes discovered on the body of Proffessor Festus Iyayi’s Body has given life to the suspicions by his fellow colleagues that he may have been shot to death and not killed in an accident as widely reported. 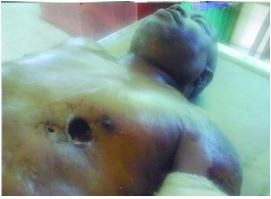 Iyayi was travelling to Kano in the company of three other ASUU members for a meeting on the ongoing strike by members of the union when a police escort van in the convoy of the Governor Idris Wada of Kogi State rammed into the bus the university teachers were travelling. Iyayi died instantly, while three his colleagues were seriously injured.

One Week after the accident ASUU dismissed the view that Iyayi’s death was accidental and forcefully contested the official claim that his heart was pierced by a strange object at the accident scene.

The association pointedly blamed the death on the government and “its agents”. In a statement issued by the University of Benin chapter of the union, ASUU said Iyayi did not die in an accident, but was “wilfully” murdered.

The union said it will demand concrete answers from the government for the alleged murder. It demanded that an autopsy be performed on Iyayi’s corpse and warned government officials to stay away from the burial.

Photographs below of Iyayi’s corpse obtained show holes that look like entry and exit bullet holes.

The Joint Action Front, JAF, a coalition of labour organisations,has also accused the government of masterminding Iyayi’s murder. A statement signed by its president, Comrade Abiodun Aremu, said the circumstances of Iyayi’s death are questionable.

They argued that there was nothing at the accident scene that could have drilled holes in Iyayi’s body. When told the coroner’s inquest did not support his claims, Akhaine retorted: “The coroner’s report is not the result of an autopsy. Until an autopsy is done, you cannot say anything to the contrary.”

“There is a 70 per cent probability that the man was murdered and 30 per cent that it was an accident,” he said. If it was an accident, he argued, the impact would have caused a squeeze, not neatly drilled holes. He explained that a close-range shot from a pistol would cause the bullet to enter an object, as it allegedly did Iyayi, and exit through the back.

“There is the possibility of shooting in the confusion of the accident or that the accident could have been contrived to cover up shots,” the retired colonel said. But did any of the survivors hear a shot before or after the crash? Not exactly, but they are not ruling out the possibility that a gun may have gone off on account of the impact created by the collision. This is because in all likelihood, the vehicle responsible for the accident had heavily armed passengers.

“I heard the two vehicles collide. But given that it was a police vehicle, it is possible that, as we usually notice, cops in the escort vehicles of governors are always armed. So, anything could have happened on impact,” reasoned Anthony Monye-Emima, Chairman, University of Benin ASUU branch. If that was what happened, could Iyayi’s death be described as anything but accidental? Obviously not. Lawyer and former university teacher, Professor Itse Sagay, urged caution.

Sagay, who was sacked alongside Iyayi from the University of Benin by the military regime of General Ibrahim Babangida in 1987, said: “Nobody can pinpoint exactly what was responsible for the injury (the hole in the chest), which I believe killed him.

There was no piece of iron or sharp-edged object found that could have done it. I believe the only solution to the problem is to have a very thorough autopsy to determine the cause of death and from there, one can then begin to build on what possibly could be responsible for his death.” Sagay added that since there is no doubt that Iyayi’s death was caused by somebody in Governor Wada’s convoy, a case of murder or at the minimum, manslaughter, could be established.Iyayi’s death.

Prof. Wole Soyinka insisted that Iyayi must not be buried without a coroner’s inquest.

He said: The world is watching. With the mortuary photos of the late Festus Iyayi just published, the world is waiting and watching if the corpse shown in that image will be interred without a coroner’s inquest.

To allow this to happen is to make all of us accessories to a possible crime. It means we are now attuned to the culture of impunity and forfeited all claims to elementary ctiizen security. Tributes ring hollow if doubts are silenced.

“Beyond all doubt” is a protective armour for each one of us, no matter where and how. So let the nation be placed in knowledge Beyond All Doubt over the circumstances of Festus Iyayi’s death.

That is the minimum any self-respecting society must demand, not merely as a collective shield, but in the service of Truth, and for all posterity. We remain haunted by the far too frequent, unexplained decimation in the ranks of the committed.