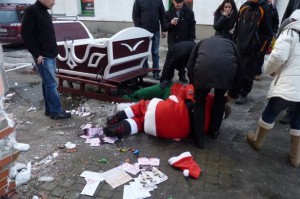 A ‘drunk Santa and his pie-eyed helper’ ruined Christmas for hundreds of excited children before ending up in hospital after falling out of their sleigh.

The boozy Father Christmas, 51, and his 31-year-old female sidekick had clearly had a few too many before they arrived to entertain youngsters at the local market.

After spluttering through a few carols and clumsily waving at locals, they trotted off down a busy high street pulled by a horse.

Unfortunately for them, they were beeped by a passing car and the frightened beast reared up, catapulting them into the road.

The worse for wear pair were left spread-eagled on the floor, and had to be taken to hospital suffering from concussion.

But their Christmas hangover may not end there, because police are looking at charing them with drink driving a horse-drawn sleigh.

Passer-by Zdzislaw Molodynski who captured the scene in Ustrzykach Dolnych, Poland, on camera said: “It was quite extraordinary.

“They were supposed to have been an attraction at the local market and lots of people were taking their children there to go and see them.

“But instead they saw these two, who were clearly under the influence, behaving like they had just come out of a nightclub or something.

“Then a car started beeping them which threw the horse into a panic.

“It reared up and sent them smashing into the wall on the corner of the street.

Magda Dudzinska who had taken her seven-year-old son to meet the Santa said: “I’m not happy they had a crash or are in hospital, but I’m delighted we didn’t get to meet them.

“Who knows what they would have done in that state. The were clearly in no state to deal with children.”

The pair were taken to local hospital suffering from concussion.

Police spokesman Dorota Glazowska said: “Technically, they were drunk while in charge of a vehicle on the road.

“We are looking at pressing charges.”