Former President of the United States, George Bush, on Thursday told the leadership of the country and its people to fight corruption, saying it had become the obvious challenge against its development. 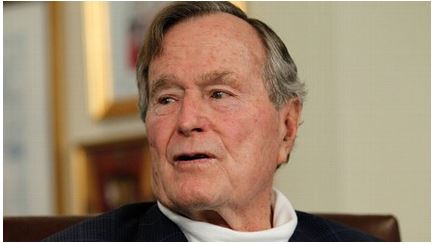 Bush, who is in Lagos as a guest speaker at the Access Leadership Conference 2013, said corrupt people, no matter how highly paced, should face the wrath of the law.

The event, which was organised by Access Bank Plc with the theme, ‘Embracing Sustainable Leadership, attracted world leaders, including a former President of Ghana, Mr. John Kufuor.

Bush, who commended the country for its current democratic dispensation and sustenance, said the US encouraged governments that fight corruption by giving them aids to support their economies.

He noted that the criteria for receiving aids had been tied to countries that ensured that anti-corruption strategies were in place.

“You must apply the law, no matter how powerful somebody may be, as this encourages entrepreneurship and economic development,” he added.

While calling for improved trade relations among African countries, Bush said it was in the interest of the US to encourage economic growth in vital countries like Nigeria.

Bush said, “As President of a powerful and rich nation, I think it is important to set goals and also achieve them. It is important for us to encourage and stay engaged with other world economies.”