Reports reaching us indicate that Taraba State has spent over $1.2 million (about N200 million) on medical treatment of Governor Danbaba Suntai, who was left with a brain injury in the October 2012 plane crash. Taraba has also spent millions on security votes to the injured Governor, estacode payments to him as well as members of Mr. Suntai’s inner circle, and transportation. According to investigations, the Governor’s maintenance cost Taraba State almost half a billion naira. 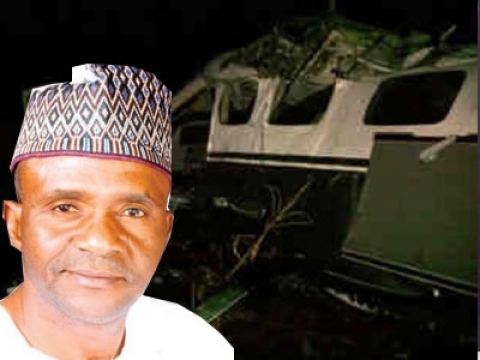 It will be recalled that Mr. Suntai was involved in a plane crash in October, 2012. A small plane he was piloting crashed near Yola Airport in Adamawa State. After a brief stay at the National Hospital, Abuja, the injured governor was flown to a hospital in Germany. He was later transferred to the Johns Hopkins Hospital in the State of Maryland, the United States. After spending a few months there, he was admitted at a rehabilitation center for trauma patients in Staten Island, New York.

Investigations by SaharaReporters reveal that funds spent on Mr. Suntai’s treatment were not documented as formal expenditure by the state government.

Instead, the funds were either either directly channeled into the personal account of one Aliyu Umar, a US-based friend of Mr. Suntai, or handed to the governor’s wife, Hauwa Suntai.

In addition to the medical payments, the governor and three of his aides who accompanied him abroad were paid nightly estacode payments (allowances paid to government officials traveling on official assignments outside the country). The brain-injured governor received about $1,500 per night, while his wife and other aides received $500 each every night for the 10 months that Mr. Suntai was abroad.

Mr. Suntai’s associates, it was also learnt, demanded that the injured governor receives half of the security votes in the state with his former deputy, Garba Umar, the now-acting Governor of Taraba State.

Governor Danbaba Suntai being helped to deplane on Sunday, August 25, 2013, at the Abuja airport

A source at the state treasury disclosed: “During the time the Governor was abroad for treatment, the sum of $75, 000 (N12 million) was sent each month into a personal account.”

The payment was an addition to the sum of N100 million monthly security vote that was also sent to the same personal account apart from the governor’s monthly salary.

In addition to paying the medical bills, Taraba State also “shouldered the estacode of all those involved in the accident and those that were with Governor Suntai both in Germany and the U.S.,” one state source disclosed.

The source stated that the state government has paid all the medical expenses for the governor in addition to expenses incurred by his wife and other family members.

Mr. Suntai was flown from Germany to the United States of America in a special medical jet designed for flying patients with serious trauma. The hiring of the jet cost the state 200,000 euros, a source stated. Also, Taraba State paid $150,000 for the private jet that flew Mr. Suntai from the U.S. to Nigeria. The state also picked up the bill for a local flight that took the ailing governor from Abuja to Taraba. The state contracted Izzy Air, a private charter airline owned by Alex Izinyon, to convey the governor to Taraba. Damian Dodo, a lawyer who is close to the governor, was reportedly to have a substantial interest in Izzy Air.

Gov. Suntai finally addressed his people on Wednesday, August 28. In the brief address, he commended people of the state for their prayers and for standing by him in his moment of trial

Gov Danbaba Suntai congratulates Barr. G.T Kataps shortly after his swearing-in as Secretary to the State Government (SSG) at the Government House, Jalingo

Since arriving from treatment abroad, Mr. Suntai has continued to receive N100 million in security votes every month.

The governor also receives another $100,000 for medical care in addition to a monthly entertainment allowance that runs into millions of naira on a monthly basis.

A member of the Taraba State Assembly said he was disturbed to hear that no proper records and documentation were being kept about the governor’s medical expenditure. Asking for anonymity, he promised to raise the issue with his legislative colleagues.

“It is not right to send public funds directly to the personal account of Alhaji Aliyu Umar, a very good friend of Governor Danbaba Suntai. Alhaji Umar is not even an official of the state government in any capacity. Therefore he should not be taking charge of the medical concern of the governor when the money is coming from here,” said the assembly member.

“It is unfortunate that, despite the colossal amount being expended by the government of Taraba, no documentation of the transactions is recorded at the level of the state government.”

Several sources in the state disclosed that the transfer of funds for the governor’s treatment was always done over the phone.

“It was always done between the state government and Alhaji Aliyu Umar or the governor’s wife, Hawwa,” said one source.

Another added that, despite the colossal amount involved, nobody ever deemed it right to demand periodic updates about the governor’s health status.

A day after Mr. Suntai was flown back to Nigeria and helped out of the plane, he signed a letter that was forwarded to the state assembly indicating his desire to reclaim the office of governor. The letter and subsequent acts by Mr. Suntai’s close associates threatened to push the state into a political crisis.

According to a senior staff of the Taraba Health Ministry, “The fact of the matter is that nobody here actually knows the true health status of Governor Suntai. His health status has been treated as an exclusive property of a few people.”

At the time, a top politician in the state said a cabal around the ailing governor was determined to hold the state hostage because of the funds they tap from public funds. He named the governor’s wife, the governor’s Chief Security Officer (CSO), the US-based Aliyu Umar, and Senator Emmanuel Bwacha as members of the cabal.

Since returning from his medical trip abroad, Mr. Suntai has not been found fit enough to resume duty. No officials were available for making comments on this investigation.