Former Nigeria’s leader Olusegun Obasanjo said he is not going to reply to President Goodluck Jonathan’s latest written addition to the Obasanjo-Jonathan war of words. He has fulfilled his desire to point out the sailent issues to Jonathan, the former President explained, and pledged not to elaborate on the content of the letter. 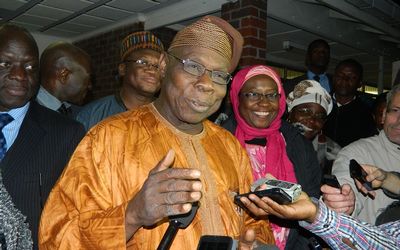 Although the Obasanjo has received numerous requests both from local and international media to comment to Jonathan’s letter, he opted to fulfill his own promise to maintain silence. However, Obasanjo did explain he does not want to dignify President Goodluck Jonathan with a reply, as he had performed “his duty to the president, the Peoples Democratic Party (PDP), and Nigeria with his December 2 letter.”

It will be recalled that Obasanjo had, in the 18-page letter, accused the incumbent President of

However, in his letter, dated December 2 and titled ‘Before It’s Too Late,’ Obasanjo stated he was ready for any backlash from the Presidency, and vowed to “maintain serenity.”

“Since the publication of the letter written by the President, Commander-In-Chief of the Armed Forces of the Federal Republic of Nigeria, Chief Olusegun Obasanjo, we have received several requests from local and international media asking to know Chief Obasanjo’s reaction to Mr President’s response,” Obasanjo’s statement read.

“One, Chief Olusegun Obasanjo acknowledges Mr President’s letter/response. However, Baba, as he already indicated in his December 2, 2013 letter, does not wish to make further comments beyond the contents of his last letter to Mr President or react to the said letter/response from Dr Goodluck Ebele Jonathan.

“Two, let me reiterate here that Chief Olusegun Obasanjo, GCFR, has tremendous respect for the office of the President of the Federal Republic of Nigeria.

“Chief Olusegun Obasanjo sincerely appreciates all of you, my cherished colleagues; gentlemen and women of the media profession, who have been very upright, ethical and robust on the subject matter,” Mr. Oladunjoye concluded.