Late Taiwo Jamani, the Ireland base Nigerian had been in the news for weeks now. 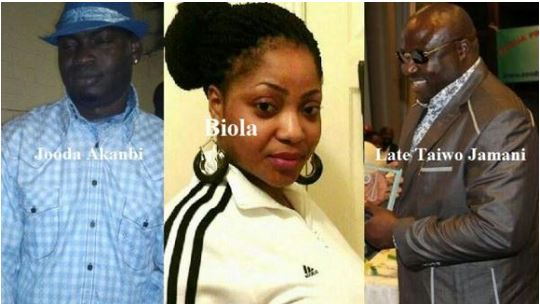 Jamani died soon after spending sometime in the hospital following serious injuries he sustained when he was attacked by an irate countryman in Dublin in Ireland.

The brain behind his predicament was said to be a certain woman who is allegedly said to be dating him and another friend of him, Jooda Akanbi, his assailant.

The woman, simply identified as Biola, was described as a mother of three who had lost her husband because of certain suspicion which he (the husband) had about Biola’s ways of life. He moved out to a different location.

Contrary to some rumours that the two men had a business connection that strained their relationship, it has now emerged that Biola played an important role in helping Police in their investigation.

According to a reliable source, a major rivalry issue sprang up sometime last year following a short meeting between Taiwo and Biola who was already enjoying a blossoming love and business relationship with Jooda Akanbi, the killer.

Following the discovery of an underground romance between the two, Jooda developed a cold feet , thinking that the business relationship between him and Biola would be put into jeopardy and the feeling that the other party may benefit more from the business link, he decided to crawl back appealing to the lady that she would benefit more from him than she will from Taiwo.

Reports gathered from eye witness account has it that, ”On the day of the incident, Jamani had visited Biola’s home and had been sighted by Jooda who was driving past the area.

He stopped in the middle of the road and started insulting Taiwo Jamani. Jamani reportedly maintained his silence. Jooda, having sensed that all his effort to make Taiwo get angry didn’t work, got so irritated that he was being belittled and then pulled over and parked the car. He walked back to confront Taiwo.

At this point, Mr Jamani, in spite of the ugly situation, walked away with his shoulders high. Jooda Akanbi, feeling more insulted by the way he was ignored, went back to his boot to pick up a baseball bat. On getting to Jamani, Jooda slapped him and still Jamani continued walking away from him.

As he walked away from the scene, Jooda  thentook his baseball bat and hit Taiwo on the head.

Taiwo fell down and was unconscious, wailing and groaning on the floor. He was immediately rushed to the hospital where he eventually died weeks after.