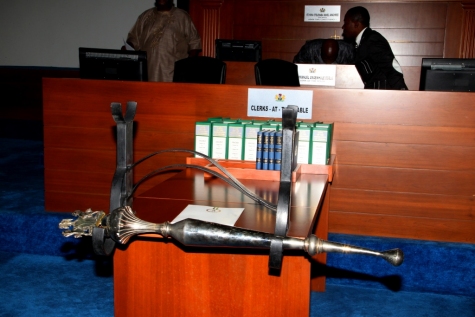 There appears to be no end in sight to the many political crisis rocking Rivers State as two men Otelemaba Dan-Amachree and member representing Ogu/Bolo State Constituency, Evans Bipi lay claim to the office of Speaker of the House of Assembly even as the state Commissioner of Police, Mr. Joseph Mbu, Tuesday, issued a directive to members of the state Assembly to sign an undertaking to be of good behavior at the resumption of sitting.

Rt. Hon. Amachree, who is the authentic Speaker, was allegedly impeached last July by five out of the 31-member Assembly and purportedly replaced with Hon. Bipi – an unapologetic protégé of the Supervising Minister of Education, Mr. Nyesom Wike and known political adversary of Governor Chibuike Amaechi.

The police directive was signed by the state Assistant Commissioner of Police, Mr. John Amadi, on behalf of Mbu and addressed to the Clerk of the House of Assembly.

The directive specifically instructed the lawmakers to report to the office of the Deputy Commissioner of Police in charge of Criminal Investigation Department (CID) to sign the undertaking.

Both the anti and pro-Amaechi lawmakers, according to the directive, are expected to sign the undertaking before they will be allowed access to the House of Assembly Complex.

The directive reads in part: “You are by this letter also requested to invite all members of the RSHA, to kindly report to the Deputy Commissioner of Police, in charge of Criminal Investigation Department, where each member of the House will sign an undertaking, that they will conduct themselves in an orderly manner, when they resume sitting”.

The state police command, however, insisted that it had not received a copy of a Federal High Court in Abuja which nullified the takeover of the functions of the House of Assembly by the National Assembly.

“You may wish to recall the court judgment of Wednesday, December 11, 2013, in which the Federal High Court sitting in Abuja, headed by Justice Ahmed Mohammed ruled that the Rivers State House of Assembly should resume sitting.

“This command has yet to receive a copy of the said court judgment. However, the CP directs the Explosive Ordinance Disposal Unit, Dog Sniffing Unit and the C41 Unit, to carry out thorough security inspection and sweeping of the entire premises of the RSHA, in preparation for resumption of legislative duties,” the directive further reads.

Reacting to the latest turn of events, the Deputy Speaker of the State House of Assembly, Mr. Leyii Kwanee, told journalists that the lawmakers would seek the counsel of their legal team over the invitation by the police.

Kwanee said, “We are taking a look at the letter. We also intend this morning to liaise with our lawyers for proper briefing.

“Suddenly, the police that we did a letter to sometime last week with a view to visiting the CP in order to give him an update as it relates with what has been going on the House, have written that we sign an undertaking”.

Speaking in Port Harcourt, the State capital on Tuesday, Bipi, who is the leader of the anti-Amaechi lawmakers, insisted that he was set to resume duties as the speaker of the state House of Assembly despite a subsisting order by a Rivers State High Court in Ahoada restraining him from parading himself as such.

According to Bipi, “Does Amaechi obey court orders? My intention is not to sit and impeach the governor. This is a democracy. I am going there (Assembly) to resume my duties as speaker.

“No kangaroo court order can stop me from resuming my duties as the speaker of the Rivers State House of Assembly. I cannot obey any kangaroo court in Ahoada”, Bipi insisted.