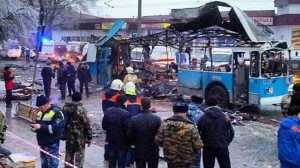 At least 15 people – including a one-year-old child – have been killed in an explosion on a trolley bus in Volgograd, the second fatal attack on the southern Russian city within 24 hours.

The blast comes just a day after a female suicide bomber killed 10 people and injured dozens at a train station in the southern Russian city.

Investigators say the latest attack is an act of terror.

The attack come 40 days before Russia is to hold the Winter Olympics in the Black Sea resort city of Sochi.

Volgograd, the renamed Stalingrad, is 900 kilometres south of Moscow and 600 kms north-east of Sochi.

A suicide bomber, reported to be a ‘Black Widow’ terrorist, struck at a train station in Volgograd on Sunday, killing at least 15 others and wounding scores more.

The bomb, which had been packed with nails and screws, contained about 10kg of explosives, Vladimir Markin, a spokesman for federal investigators, said.

No one immediately claimed responsibility for the bombing in Volgograd, but it came several months after Chechen rebel leader Doku Umarov called for new attacks against civilian targets in Russia, including the Sochi Games.

Suicide bombings have rocked Russia for years, but many have been contained to the Caucasus, the center of an insurgency seeking an Islamist state in the region. Until recently Volgograd was not a typical target, but the city has now been struck twice in two months – suggesting militants may be using the transportation hub as a renewed way of showing their reach outside their restive region.