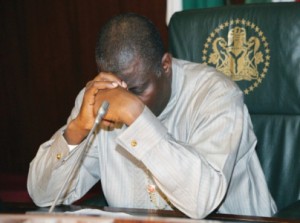 Lawyers and opposition politicians have responded to a statement from the presidency which warned the All Progressives Congress, APC that calls for the impeachment of President Goodluck Jonathan amounted to treason, saying charges of incompetence were currencies for traffic by the opposition in a democracy.

Oyetibo said: “Impeachment is a term provided for in the constitution, so it cannot be a treasonable offence. But it depends on the circumstances.

“If they go about it in a manner other than what is provided for in the constitution, then it is.”
Oditah said: “Why would it be treason? Is it not what the constitution provides for?

“If APC comes up with the plan to impeach the President it is no treason itself. Why would it be treason if APC has members in the National Assembly who are able to pass the resolution? Why would that be treason?”

Sagay on his part said: “I was rather surprised. In a democratic setting, hard words between rival political parties do not matter. It is like what they eat— like bread and tea— for dinner.

“And what should happen is that the political operators on each side should prepare well, so that they know how to throw feedback at the other side.

“If they say something, you will reply with something sharper and more deadly. That is democracy.

“When you begin to resort to threats by using state power, it shows that you are politically immature.”

Ngige said: “They are trying to be mischievous and childish by such statement. Are impeachable offences for the executives not part of our constitution?

“So, does the call mean that the President is going to be removed?

“Meanwhile, it is unfortunate that an educated fellow like Dr. Reuben Abati can be issuing such statement, when I think he is supposed to be well informed about what democracy is all about.”

“Even though I do not personally agree with it in the sense that I will want the National Assembly to investigate properly and give the President time to respond to the issues that have been raised, but that does not mean that anyone calling for the President’s impeachment has committed a treasonable offence.”

“That is one of the most careless responses I have gotten from the Federal government in recent time.”

Meanwhile, it emerged that the All Progressives Congress, APC, was yet to mobilise its members in the National Assembly to commence the impeachment of President Goodluck Jonathan despite its call on Sunday on the legislators to commence the removal of the President.

APC had through a press statement last Sunday urged the members of the National Assembly across party lines to commence impeachment proceedings against the President on the basis of alleged incompetence and misconduct arising from his alleged tolerance of corruption.

PDP Lawmakers have however dismissed the impeachment call. Ahead of the weekly strategy meeting of the leaderships of the Senate and the House of Representatives yesterday evening, Senate Leader Senator Victor Ndoma-Egba, and the Deputy House Leader, Leo Ogor, dismissed the call from APC as inconsequential.

Noting that the PDP Senate caucus had not met over the issue, Ndoma-Egba said: “The threat was made yesterday (Sunday). We haven’t met and our party has not told us that he has done anything that would warrant impeachment proceedings.

“It is just a call. It remains what they called it— a call.”

Ogor on his part dismissed the call, saying it could destabilise the integrity of the House and the country.

He said: “This is a wishful thinking by the opposition, but it will have a very serious effect on the cohesion and unity that this Assembly has enjoyed since inception.

“It will have a destabilising effect on the body polity of this great country because impeachment process is not a tea party but a very serious issue.

“Impeachment is an impossibility in this case. They should wait and use the ballot box rather than use the National Assembly,” Ogor said.

Members of APC in the House also dismissed threats of a treason charge from the Presidency as they asserted that impeachment was a part of the democratic process.

He said: “It’s an empty threat. Impeachment is a constitutional process by which a parliament removes from office a president, vice president, governor or deputy governor.

“It cannot amount to treason because it’s not an unconstitutional means to change government.

“What the Presidency should do is to respond as honestly as possible to all the issues of constitutional breaches flying everywhere through various letters.”

Also speaking, Faparunsi Bamidele, APC Ekiti, dismissed the threat, saying impeachment is a legislative tool that can be used to checkmate the excesses of any president.

He said: “Calling for the impeachment of the president cannot amount to a treasonable offence, rather it is a legitimate thing to do.

“It is an opportunity for Mr. President to x-ray himself and correct his mistakes,” he said.