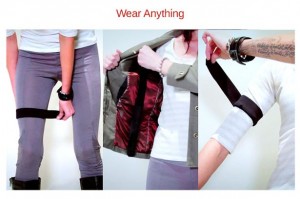 Music lovers around the world rejoice, the next great musical instrument is here – a drum kit for your LEGS.

DrumPants allow wearers to tap away on their legs – or any other part of their body – and with the magic of some velcro sensors and a control box, making music is easy.

And it’s not just drums, the control box can be altered to produce one of over 100 sounds from guitar to piano.

The idea is the brainchild of San Francisco bright spark Tyler Freeman who came up with it as a prank, but has seen it evolve over six years of hard work.

“Over the years it expanded beyond a stunt, to a master’s project, to an educational tool used to teach teenagers about programming and music production, to finally what it is today: an industrial, production ready wearable music kit,” says the DrumPants’ Kickstarter page.

They are using Kickstarter to help raise funds for the product, giving willing punters the chance to get their hands on a DrumPants kit or a variety of other related gear.