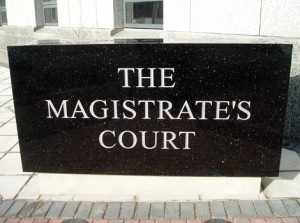 A 31-year-old man, Chidi Osuagwu, faced an Itire Magistrates’ Court in Lagos on December 24, 2013, Tuesday, for allegedly biting off his friend’s upper lip.

The accused, who resides at Ijeshatedo Lagos suburb is being tried for assault.

Olakunle Shobanire, on the side of the prosecution, told the court that the accused committed the offence on September 25, 2013, at 9.00 p.m. in Itire area of Lagos.

The Prosecutor alleged that the accused was at a beer parlour when the complainant, Sunday Adebayo, asked him to buy him a bottle of beer, but he refused.

The complainant jokingly chided the accused for failing to buy him beer which angered Mr. Osuagwu and he immediately assaulted Mr. Adebayo by biting off his upper lip, he said.

The accused entered a plea of not guilty and was granted bail in the sum of N40,000 with one surety in like sum.

A.O. Gbajumo, the Magistrate, has adjourned the case to January 13, 2014 for mention.