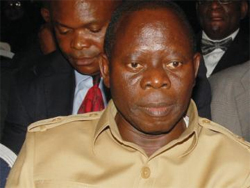 The Edo State governor, Comrade Adams Oshiomhole has described the ongoing nationwide warning strike by the Nigerian Medical Association which is expected to terminate next Sunday, as provocative, illegal, avoidable and unnecessary.

The governor, a former labour leader also warned that any doctor in the employ of the state government that joined the strike would not be paid.

Oshiomhole made this known during a meeting with the Association of Resident Doctors (ARD) and Medical and Dental Consultants Association (MDCA) in Government House, Benin, the state capital yesterday.

“There is nothing in the convention or the law that allows you to simply walk out on your job. The fact that your colleagues under federal employment had dispute and they sought meeting with the minister of health, those are meetings between your colleagues and the Federal Government. How is Edo State a part of that?” the governor said.

He added: “I expect that if you feel obliged to go on that strike, I think you should inform us that the strike is inevitable. I do understand the logic and essence of solidarity, but in this business, before you resort to solidarity action, people who are themselves directly involved in the dispute may choose on their own to first go on strike.

“If after sometime you feel that no one is listening and there is a need to reinforce by way of solidarity, subject to the rule of law, then you can decide to go on a secondary action.

“I am not aware that you can go on strike the same day as those who are directly affected”.

Gov. Oshiomhole argued that if solidarity was the reason for the participation of doctors in the state in the ongoing strike action, then doctors in private practice ought not to be rendering services to patients.

According to him, “I am unable to resist the conclusion that the strike is designed to enrich those at the private practice by shutting down public hospitals so that those who are sick will have no choice but to go to private clinics where some of your members on strike go to work.

“And to think that anyone would do this, such that those who cannot afford private health care are now left to die, is a gross abuse of your skills.

“It borders on blackmail on the entire system and holds all of us to ransom. When a doctor no longer bothers about the life of a patient that is the beginning of the end”, he said, adding that “In Edo State, we will not submit to this blackmail. You are doing essential services – because of the nature of your work, you are not expected to go on strike. Let us realise that beyond naira and kobo, there is life”.

Speaking on behalf of the delegation, Dr. Eghe Abe said the association would convene for a dispassionate consideration of the issues raised by the governor and what is in the best “interest of the state”.