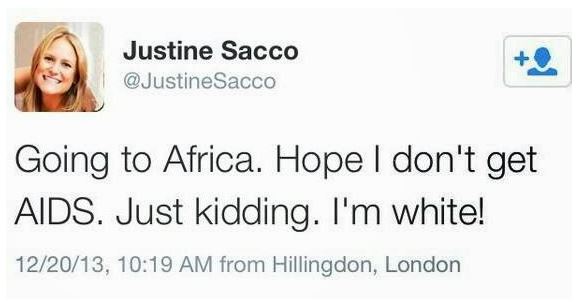 Justine Sacco, the communications director for InterActiveCorp, better known as IAC based in New York, tweeted what you see above from an airport in London on her way to board a flight to an African country. How a cringe-worthy statement like this is ‘Just kidding’ is beyond me.

Unfortunately for Ms Sacco she couldn’t take the tweet down for hours because she was on a long flight to Africa…by the time she landed several hours later, not only was there an outcry on Twitter, her job was also on the line. The company she works for quickly responded by releasing a statement

“This is an outrageous, offensive comment that does not reflect the views and values of IAC. Unfortunately, the employee in question is unreachable on an international flight, but this is a very serious matter and we are taking appropriate action.” the company said in a statement.

The tweet was deleted late last night (American time) very early this morning (African time). Not only that, Ms Sacco’s entire Twitter account has been deleted. There are also reports that she has been fired by IAC. What an ignorant and tasteless statement to make…even as a joke.