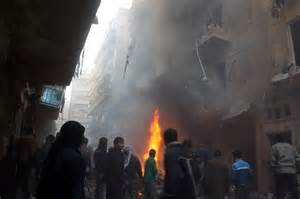 At least 25 people were killed in regime air raids on rebel districts of the northern city of Aleppo on Sunday, the Syrian Observatory for Human Rights said.

Fourteen children and an 18-year-old boy are among 25 people killed, he said updating an earlier toll, and warning that the toll could rise because many people were wounded, some in critical condition.

The Aleppo Media Centre (AMC), an activist network on the ground, reported several air attacks on rebel-held areas of the city.

The city is now divided into pro- and anti-regime areas, and according to the AMC, the regime uses its air force near daily to target rebel districts.

An AMC activist in the city, Mohammed al-Khatieb, said in a message posted on Facebook that the raids were “unprecedented.”

“Everyone is looking up at the skies and watching the planes. But there’s nothing to be done,” he said.

Barrel bombs were dropped on some 10 neighbourhoods of the city, Khatieb later told AFP, adding: “Many people have been killed.”

The bombings came a day after the Syrian Red Crescent on Saturday delivered food and medicine to the Aleppo central prison, which has been under rebel siege for eight months.

Earlier this week the government announced an amnesty for scores of prisoners held on criminal charges due for humanitarian reasons.

Fifteen prisoners have already been released, escorted out of the jail by volunteers, according to the Observatory while 341 other detainees are awaiting to be freed.

Meanwhile, in Adra northeast of Damascus, at least 32 civilians have been confirmed dead in Adra since Wednesday, when Islamist rebels launched an offensive aimed at capturing the key entrance into the capital, said the Observatory.

The group, which had earlier reported a toll of 28, added that at least four of the dead were women, and that most of the fatalities belonged to President Bashar al-Assad’s Alawite sect.

“Reports have also surfaced of dozens of people missing from Adra,” said the Observatory, which relies on a network of doctors, activists and lawyers on the ground for its reports.

The army has vowed to “crush” Islamist rebels in the industrial town, which has seen fierce fighting for five days.

Most of the country’s Alawites — whose religion is an offshoot of Shiite Islam — support Assad, and many members of other minority groups fear a Sunni Islamist victory in the Syrian conflict.

More than 126,000 people have been killed in Syria since March 2011, and millions more have fled their homes. [AFP]