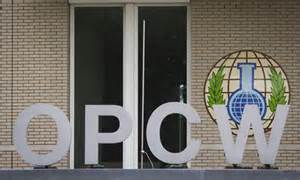 Russian armoured trucks will help take Syria’s chemical weapons out of the country, tracked by US satellite equipment and Chinese surveillance cameras, in an unprecedented international operation, the world’s chemical watchdog said.

The details are part of an ambitious plan unveiled by the Organisation for the Prohibition of Chemical Weapons (OPCW) at a meeting of its Executive Council published Wednesday despite delays to the overall operation which aims to be completed by mid-2014.

The plan draws on the resources of multiple countries to remove and destroy Syria’s declared stockpile of about 1,300 tonnes of chemicals weapons, ingredients and precursors.

Several nations have already announced offers of help, including the United States, in the project to destroy the weapons, including mustard gas, sarin and VX nerve gas.

The OPCW had set itself a December 31 deadline for the most dangerous chemicals to be taken out of Syria, via Latakia, but that date is likely to be pushed back.

Syria’s most dangerous chemicals must be destroyed by March 31.

“Schedules have been disrupted by a combination of security concerns, clearance procedures in international transit and even inclement weather conditions,” OPCW head Ahmet Uzumcu said in his speech made at an Executive Council meeting on Tuesday.

Russia will also provide sailors and naval vessels to secure cargo operations at Latakia and within Syrian territorial waters.

The chemicals will be destroyed on board of a specially adapted US ship because they are too dangerous to import into any country. There is no agreement yet on where the ship will anchor while the work is carried out.

“The United States of America will provide facilities necessary to neutralise the priority chemicals on board one of its vessels at sea,” Uzumcu said in a statement issued on Tuesday.

Denmark and Norway plan to use two cargo vessels to transport the chemicals from Latakia to the US ship. The plan is for them to be accompanied by frigates from the two Scandinavian countries.

A US-Russia deal for Syria to surrender its chemical arsenal narrowly averted US airstrikes on the regime of President Bashar al-Assad, after Washington said 1,400 people were gassed in the rebel-held Ghouta area near Damascus in August.

The OPCW is overseeing the implementation of UN Security Council Resolution 2118, which was penned over an agreement hashed out by the UN and Russia.

The deal was struck in September following the chemical attack in the rebel-held Ghouta area near Damascus in August.

Syrian rebels and the regime blamed each other on the attack.

The OPCW previously announced that all declared equipment and sites for producing chemical weapons in Syria were rendered unusable. [Al Jazeera]