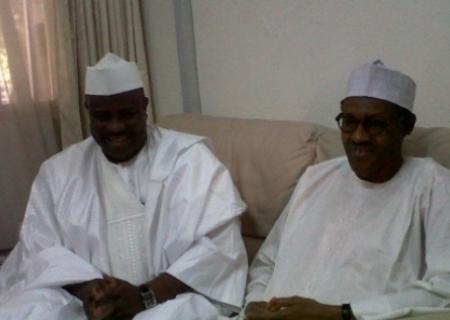 The Speaker of the House of Representatives, Rt. Hon. Aminu Waziri Tambuwal has denied media reports that he attended a meeting of the five governors, who recently dumped the ruling Peoples’ Democratic Party, PDP, for the All Progressives Congress, APC, saying he only went to see his governor, Alh. Aliyu Wamakko of Sokoto State, who is one of the defectors.

The five governors met with the leadership of the APC on Monday night at the Kano State governor’s lodge in Asokoro Abuja but there were reports in a section of the media that the Speaker attended the meeting briefly.

But Tambuwal’s spokesperson, Imam Imam, on Tuesday said, “The speaker went to see his governor who sought to see him and he went there before the meeting commenced and it did not commence before he left the lodge”.

He said it was wrong to assume the speaker was at the Kano State governor’s lodge to attend the meeting even when it was apparent that he left before the meeting started.

Mr. Imam, however, added that there was nothing wrong for his principal to go and see his governor anywhere, just as he could go anywhere to see the President if requested to do so.

Others are Governors Kayode Fayemi of Ekiti; Babatunde Fashola of Lagos; Bola Ajimobi of Oyo, Musa Kwakwanso of Kano; Rotimi Amaechi of Rivers; Ibikunle Amosun of Ogun; Murtala Nyako of Adamawa and Aliyu Wamakko of Sokoto.

Mr. Imam also denied recent reports suggesting that Mr. Tambuwal would resign as a result of the expected mass defection of lawmakers from the PDP to the APC following the defection of five governors last Tuesday.

“There is no iota of truth at all on these insinuations; he has never considered resignation and it has never been discussed,” Mr. Imam said.

He stressed that Mr. Tambuwal was elected to serve a mandate and he is focussed on that mandate.