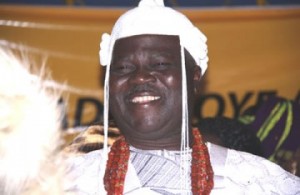 Tension was averted on Tuesday at Isikan area of Akure as elders calmed youths who would have resisted the Akure youths that went about enforcing the 7-day mourning order for the deceased Deji of Akure. The enforcement did not go so well at Isolo area where youths resisted them as they claimed whatever orders given as a result of Deji of Akure’s death had nothing to do with them as they claimed they were a sovereign land.

Youths of Isikan wouldn’t let the ‘excesses’ of the Akure youths go unchecked on Wednesday following the alleged resolve of the Akure community to cut the sacred Ose tree in front of the palace of the Iralepo of Isikan, Oba Joseph Olu Ojo, as part of the traditional funeral rites for the late monarch, the Deji of Akure, Oba Adebiyi Adesida.

According to tradition, once the tree is cut, it means that Isikan has a new Oba or that the Oba had joined his ancestors.

Isikan youths, however vowed to resist any attempt by the Akure community to cut the sacred tree, stating that Akure and Isikan are two distinct communities with distinct traditions and customs.

Speaking with journalists in his palace, Ojo urged the people to allow peace to reign in Akure communities while the traditional rites for the departed monarch last.

The monarch said the period should be seen as a moment of sober reflection and should not be used to cause further division among the communities in Akure kingdom.

He added that Akure communities had agreed to close all markets for seven days in honour of the deceased monarch.

According to him, though Isikan and Isolo are not expected to be affected by the mourning of the monarch, they agreed to close all shops and markets for seven days in order to allow peace to reign in the state capital.

The monarch said the Isikan people agreed to this because of the respect they have for the administration of Dr. Olusegun Mimiko, who had done a lot to change the face of their community and they would not do anything to disturb the peace of the land.

The monarch also disclosed that the three communities within Akure had signed an undertaking to embrace peace during a meeting with the state Commissioner for Chieftaincy Affairs, Bamiduro Dada.

Ojo however warned that the people of Akure community should not push their luck too far by attempting to cut the sacred tree as threatened because Isikan has its own customs and tradition that are different from that of Akure.