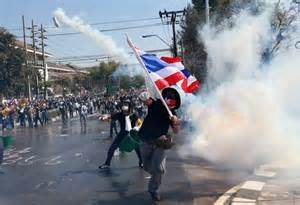 The leader of Thailand’s anti-government protests has met Prime Minister Yingluck Shinawatri and told her he will accept nothing less than her resignation and an appointed council taking over the government.

In a defiant tone, Suthep Thaugsuban said on Sunday that the meeting with Yingluck was held under the auspices of the military, which says it is neutral in the conflict that has killed at least three people and injured 103.

Suthep told his supporters the talks with Yingluck in Bangkok, the capital, did not constitute negotiations after the protesters had dubbed Sunday “victory day”.

“If Prime Minister Yingluck Shinawatra listens to the people’s voices, we will treat her like gentlemen because we all are good citizens,” he said.

Suthep said it would take another two days for the protesters’ goal to be reached. He earlier called for all public servants to take Monday off.

Spokesmen for both the prime minister and the army declined to comment, saying they were too junior to talk about any meeting. But Teerat Ratanasevi, a government spokesman, said Yingluk was not expected to make a public statement on Sunday night.

She did not appear in public, and her aides said she was in a safe place.

Police on Sunday fought off mobs of rock-throwing protesters who tried to battle their way into the government’s heavily-fortified headquarters and other offices.
Mobs also besieged several television stations, demanding they broadcast the protesters’ views and not the government’s.

Several of the capital’s biggest shopping malls closed in the heart of the city due to the unrest.

With skirmishes around Yingluck’s office at Government House continuing as darkness fell, the government advised Bangkok residents to stay indoors overnight for their safety.

The protests have renewed fears of prolonged instability in one of Southeast Asia’s biggest economies.

While talks between the main protagonists would suggest a faint possibility of a peaceful settlement, it also would underline the traditional powerbroker role of the military, which could tumble the government even without a coup by refusing to let its forces help keep the peace.

More than 2,500 military personnel were deployed Sunday in support of police defence efforts.

Political instability has plagued Thailand since the military ousted Yingluck’s brother, Thaksin Shinawatra, in a 2006 coup.

In 2010 pro-Thaksin protesters occupied downtown Bangkok for weeks in a standoff that ended with parts of the city in flames and more than 90 dead. [AlJazeera]