Home General News World news Thailand Protests: I Am Willing To Do Anything That Will Make People...
Facebook
Twitter
WhatsApp 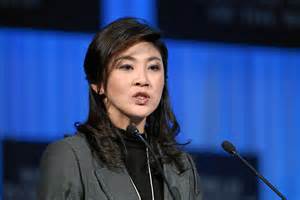 Thailand’s Prime Minister Yingluck Shinawatra has told the country she will do anything to stop the violence that has ravaged the streets of Bangkok, but cannot accept the demands of protesters.

“Anything I can do to make people happy, I am willing to do… but as prime minister, what I can do must be under the constitution,” she said in a televised address on Monday.

These were her first comments since violence erupted late on Saturday after weeks of peaceful protests.

“The armed forces will be neutral and I know they want to see the country in peace,” Yingluck said, adding that her immediate aim was to restore “peace” to Bangkok’s streets.

She also pledged that “police will not use force against the people”.

However, not long after Yingluck said she would open every door to end the crisis, her national security chief admitted that rubber bullets are being used against protesters.

Police used tear gas and water cannons at the heavily guarded government headquarters to drive thousands of protesters back, as demonstrators hurled sticks, stones, bottles and other projectiles at security forces, manning barriers at the besieged complex.

The protesters had set Sunday as Victory Day to topple the government, but failed to achieve their goal of seizing the prime minister’s office.

The UN closed its main office in Bangkok, dozens of schools stayed empty and many civil servants did not show up at work on Monday after the unrest that rippled around the key government buildings in the capital over the weekend.

In an e-mailed statement to its staff, the UN’s security department said that “there could be violence [on Monday] on a large scale… staff should avoid government offices” and other protest locations.

Suthep Thaungsuban, the opposition protest leader, said on Sunday that he met Yingluck but insisted there were no negotiations to end the political crisis.

The protests were prompted by an amnesty bill, which opponents feared would have allowed Thaksin Shinawatra, Yingluck’s brother and former prime minister, to return to the country.

49-year-old Thana Narkboonnam, an anti-government protester, told Al Jazeera: “We want a revolution to be able to choose better representatives. This government is full of corruption, the political system needs to be entirely changed.”