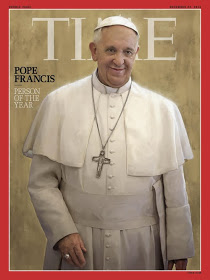 This must be a first and an amazing feat.

Pope Francis has just been head of the Catholic church for only 9 months but has already gained an arknowledgement some people never get their whole life.

The head of the Catholic Church, Pope Francis has been named TIME magazine Person of the Year 2013.

TIME said the former Argentinian Cardinal has become the ‘new voice of conscience and is the person who had the greatest impact on the world in 2013.

“Rarely has a new player on the world stage captured so much attention so quickly – young and old, faithful and cynical – as Pope Francis,” editors at Time Magazine said.