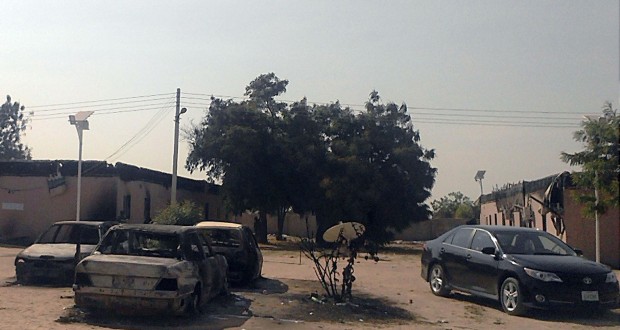 The Defence Headquarters (DHQ) said 24 insurgents died during an exchange of fire between security forces and suspected terrorists in the pre-dawn attack in Maiduguri.

This information is contained in a statement signed by Brig.-Gen. Chris Olukolade, the Director of Defence Information, in Abuja on Monday.

According to the statement, the Nigerian security forces repelled the attack.

The statement said military locations, which included the Nigerian Air Force Base in Maiduguri, were targeted during the attack.

It stated that three decommissioned military aircraft as well as two helicopters were incapacitated in the course of the attack.

“Two Air Force personnel were also wounded while 24 insurgents died during the exchange of fire.

“Security forces are in pursuit of the terrorists in the Djemtillo general area along the Maiduguri/Banishek axis”, the statement stated.

It added that movements in Maiduguri and environs had been restricted.

It also enjoined citizens to report any of the fleeing insurgents, most of who could be identified with gunshot wounds whenever they were sighted.

The statement also stated that normal flights operation to and from the Maiduguri Airport, which was earlier disrupted temporarily, had resumed. (NAN)