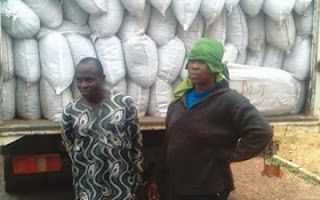 The Oyo State Police Command has intercepted a lorry with 646 bags of weed suspected to be marijuana. The police also arrested two suspects, David Ndidi and Toyin Adegoke, in connection with the discovery.
Commissioner of Police, Mohamed Ndabawa, said the command acted after intelligence was received on the activities of the suspects.

He said “On November 29, a consignment of weed suspected to be Indian hemp was packaged for conveyance in a truck at a cannabis plantation in Eleja village, near Akanran, Ibadan.
The police intercepted the truck with number plate, Lagos XR 967 JJJ. The value of the weed is N11m. Ndidi and Adegoke were arrested while the driver escaped from the scene. We are still making effort to arrest the rest of the people involved.”
Ndidi, 30, told our correspondent that he was an assistant to the driver of the vehicle and that he did not know that the bags of weed were marijuana.

“I was hired to assist the driver and my fee was N10,000. The bags were locked at the back of the vehicle and I did not suspect that they were marijuana. When police stopped us, he jumped and ran into the bush, but I waited because I did not suspect that we were transporting marijuana,” he said.
Toyin told our correspondent that she traded in orange and that she came from Ilorin to buy the fruit in the village when she was arrested.

She said, “I was buying oranges to be transported to Ilorin when I heard gunshots. I thought they were armed robbers, so I ran just as others did. But when I realised they were policemen, I stopped because I knew that I was doing legal business. But I was arrested despite the other man (Ndidi) telling them that I was not one of them. I appeal to the police to investigate the matter again and visit my house in Ilorin. I know nothing about marijuana and the man arrested in the truck,” she said