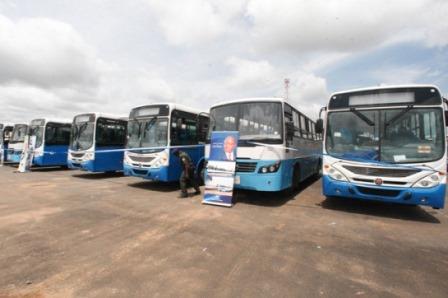 Inuagurating the buses, the governor said that the state government was committed to the provision of good and affordable transport system under its Mass Transit Scheme.

He charged the operators to ensure that the passengers pay only 50 per cent of the fare to any destination as recommended for the scheme.

Uduaghan appealed to the operators to ensure prompt remittance based on terms of agreement to enable government acquire more vehicles to boost the scheme.

According to the governor, the inauguration now brings the total number of such buses to 705 since the inception of the mass transit scheme in the state.

“We are continuing with the 50 per cent fare reduction and no driver should charge above the fixed fare as provided by the scheme.

“I appeal to the drivers to maintain the vehicles and make adequate returns so that other people could benefit from the scheme”.

Uduaghan urged women to take the challenge and join the mass transit drivers in the state.

Earlier, the Commissioner for Transport in the state, Mr Ben Igbakpa, said that the government had also provided 130 units of passenger boats to cater for the interest of commuters living along the riverside.

He said the government would deploy 70 buses to operate at the ‘Bus Rapid Transit’ (BRT) along Warri-Sapele road in the state.

“Warri BRT will be the third in Africa after Lagos and Johannesburg in South Africa and it will have the capacity to move about 42,000 passengers per day”, he said. (NAN)