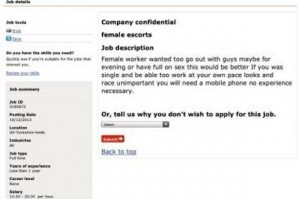 An advert for a job as a ­prostitute has appeared on a Government website.

The bungling Department of Works and Pensions allowed the “no experience necessary” offer for a single girl willing to work as a hooker to be posted on Direct Gov.

The description said: “Female worker wanted to go out with guys maybe for evening or have full on sex.”

In grammatically incorrect English it continues: “This would be better if you was single and be able to work at your own pace.

“Looks and race ­unimportant. You will need a mobile phone. No experience necessary.”

The advert was posted on the Universal Jobmatch area of the Direct Gov site last Monday by the boss of the agency.

It only has one man and woman working for it but boasts of having “the most gorgeous and ­sophisticated women and men in the UK.”

The manager said: “I put the advert up there because it’s a job site and it’s a job. I was a bit shocked they allowed it.

“I also do deliveries and I had posted an ad for a same-day delivery service and then I just put the escorting one underneath it.

“The advert says ‘must like sex’ because if a man pays for it obviously he’s going to want that. I thought the Department of Works and Pensions would admin it.

“I didn’t know it would go straight online.”

He said he decided to ­advertise after business slowed down, saying: “It’s not been that good.”

A DWP spokesman admitted the blunder but refused to say if ads were read before they went live.

He said: “The post was ­inappropriate and was taken down next day.

“When advertising jobs, employers have to agree to terms and conditions. Where an inappropriate job is ­identified it is quickly removed.”