A 14-year-old has pleaded guilty to a string of sexual assaults near a top university.

The bespectacled schoolboy, who cannot be named for legal reasons, admitted attacking a dozen women.

He initially pleaded guilty to five counts of sexual assault on five other women, committed over a fortnight near the University of Manchester earlier this year. Officers had suspected the perpetrator was as young as 12.

Yesterday, appearing in court with his father, the youth admitted seven more counts of sexual assault against seven women aged between 17 and 48. 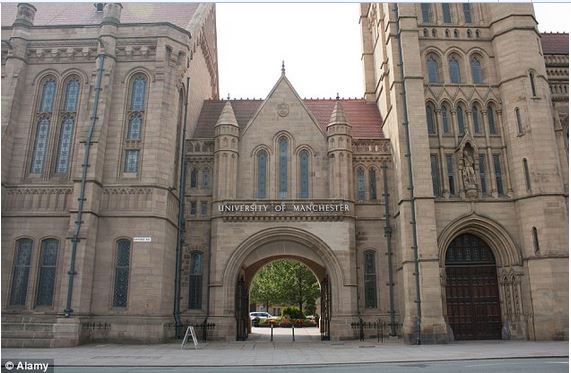 Detective Chief Inspector Colin Larkin of Greater Manchester Police said: ‘For such a young boy to have committed such appalling attacks is both disturbing and unusual. More than anything, I am pleased for the women whom this boy sexually assaulted that they have been able to see justice carried out so quickly.’

The first attack, on a 32-year-old, took place in August. It was followed by a second eight days later, on an 18-year-old, near a business centre. The next assault took place at the end of the university’s fresher’s week in September. The court heard that the campus was near the boy’s local mosque, which he attends on a regular basis.

It is understood the boy touched a 22-year-old’s backside as she walked near the university’s library in the early evening. An hour later, a 27-year-old was grabbed from behind as she walked through the campus. The woman screamed, and the youngster threatened her before running away.

Fifteen minutes after this, the boy aimed lewd comments at a 21-year-old leaving the library, before following her and then sexually assaulting her.

A fortnight later, he groped a 32-year-old in the car park of the Museum of Science and Industry near the university.

Two hours later, another 32-year-old was grabbed around the torso near the museum before being assaulted.

He attacked three other women aged between 18 and 35 on the university campus that same day.

The last attack took place on October 9 near his home in Prestwich, Greater Manchester, when he touched a 48-year-old’s breast.

The teenager was arrested later that month along with his 18-year-old brother, who has been released without charge. After the attacker’s initial guilty pleas, police investigated whether he had committed other similar offences.