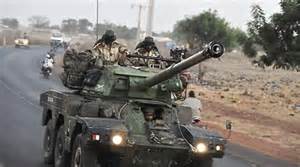 French soldiers have killed unidentified fighters in the capital of the Central African Republic near the airport, a French army spokesman told the Reuters news agency.

The army shot the men in clashes early on Thursday in Bangui, the official said.

More French troops rumbled into the country on Friday, trying to stop violence in the capital a day after armed Christian fighters raided Muslim neighbourhoods, leaving about 100 people dead.

France began sending reinforcements within hours of a UN vote on Thursday authorising its troops to try to stabilise the country.

However, French officials insisted the mission’s aims were limited to bringing a minimum of security to Bangui, where people now fear to leave their homes, and to support an African-led force.

“You have to secure, you have to disarm,” Jean-Yves Le Drian, French defence minister, told Radio France Internationale. “You have to ensure that the vandals, the bandits, the militias know they can’t use the streets of Bangui for their battles.”

The streets of Bangui were deserted on Friday morning, with the only vehicles on the road belonging to either international security forces or the rebel fighters who claim control of the government.

There was no repeat of the clashes, Le Drian said.

But since thousands of armed Muslim rebels invaded Bangui in March, the city remains awash in weapons. Recent attempts at disarmament have yielded little in a near-anarchic state.