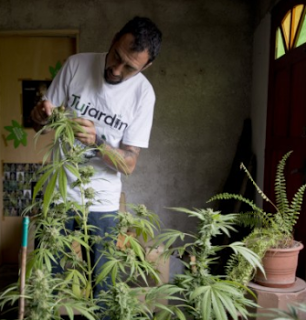 South American country Uruguay is set to become the first country in the world to allow its citizens to grow, sell, buy and smoke marijuana. The country’s Senate began its final debate on the issue today Tuesday Dec. 10th and claim they want to legalize it in a bid to take the business from criminals.

If this bill, which has the support of majority of the House and the president of the country, is passed, Uruguay will be the first country to legalize a trade that is illegal everywhere else in the world.

After the trade is made legal, Uruguay will then draft regulations imposing state control over the cultivation and distribution of marijuana. Anyone who wants to go into the business would have to be licensed and registered, with government monitors keeping tabs to enforce limits, such as the 40 grams a month that any adult will be able to buy at pharmacies for any reason.