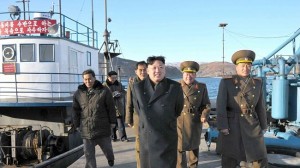 The US has called for a united front against North Korea after the “ominous” execution of leader Kim Jong-Un’s uncle as South Korea put its forces on alert for any “provocations” from its nuclear-armed neighbour.

The warning came as thousands of North Korean troops marched in Pyongyang to pledge their loyalty to the young leader ahead of commemorations Tuesday to mark the second anniversary of the death of Kim’s father and longtime leader Kim Jong-Il.

The rally was held days after North Korea on Thursday executed Jang Song-Thaek, long seen as the country’s unofficial number two and Kim Jong-Un’s political regent, for a host of charges including plotting to overthrow his nephew and corruption.

The shock execution was the biggest political upheaval since Kim took power after the death of his father two years ago.

US Secretary of State John Kerry said the purge showed the world “how ruthless and reckless” Kim Jong-Un is, voicing concerns over the nuclear weapons under the control of the “spontaneous, erratic” leader.

“It’s an ominous sign of the instability and of the danger that does exist,” Kerry said in the interview with ABC television during a trip to Vietnam.

“To have a nuclear weapon, potentially, in the hands of somebody like Kim Jong (Un) — just becomes even more unacceptable,” Kerry said.

Last week’s events showed the urgent need to get “China, Russia, Japan, South Korea, all of us to stay on the same page and to put as much effort into the denuclearisation as possible,” he said.

South Korea was on alert for potential fallout from the purge north of the border as President Park Geun-Hye warned of possible “reckless provocations” by Pyongyang.

“Given the latest development in the North, it is uncertain to what directions its political situations would evolve,” Park said in a meeting with advisers on Monday.

“We also can’t rule out the possibility of contingencies such as reckless provocations,” she said, urging the military to step up vigilance near the heavily-fortified border with the North.

Park discussed what she called the “grave and unpredictable” situation in a high-level meeting with top defence and national security officials including ministers handling intelligence and North Korean affairs.

“She ordered (officials) to strengthen the joint defence posture with the US … and continue to closely coordinate and share intelligence with related countries and the international community,” Park’s spokesman said.