About four years ago a 19-year-old teenager, Delfina Cedeno, began suffering from an awful disorder, which makes her cry and sweat blood. In addition to it, in some cases blood may also seep from her fingernails and belly button. 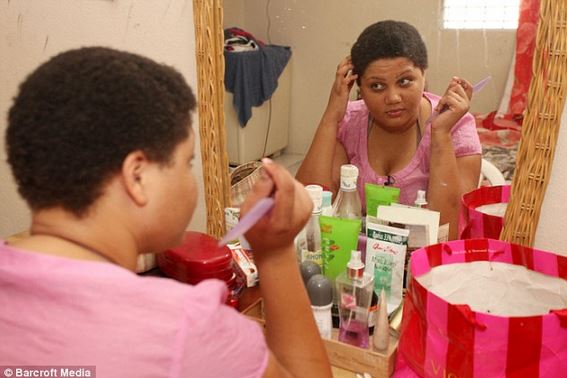 As her condition deteriorated, she started crying the red fluid, having nosebleeds and suffering hair loss.

At her worst, she has bled for up to 15 days and was once left in such a critical condition that she needed a blood transfusion. But despite hundreds of tests, doctors in her hometown of Veron, in the Dominican Republic, were left baffled.

Miss Cedeno said: ‘When this started happening to me I didn’t know what to think – I was terrified and in complete shock.

She says she became so ashamed of her condition that she was terrified of leaving the home she shares with her mother Mariana, 36.

She dropped out of school and many of her friends deserted her out of embarrassment or fear that she was contagious.

‘I’d gone into cardiac arrest and they had to give me electric shocks. There was a chance I might have lost the use of my limbs.

‘But amazingly I recovered. And now I’m really glad because after that my life started to get better.’

A few months later she met her boyfriend, Recaris Avila, who paid her a visit in hospital after hearing her story.

She said: ‘He said I was beautiful. I will remember that moment for the rest of my life.’

Now, four years after it all began, specialists have finally made a breakthrough.

It is thought Miss Cedeno suffers with a rare condition, called hematidrosis, which means she has 20 times the adrenaline levels of a normal person.

The anxiety attacks it causes makes her blood pressure rise so severely that she sweats – and this sweat comes out of her body as blood.

The condition is extremely rare. According to a study published in the Indian Journal of Dermatology, the many blood vessels which surround the sweat gland constrict, or narrow, under the pressure of stress.