The Nigerian military said yesterday that it launched ground and air operations over the weekend on locations used by terrorists in the Alafa forests, 21 kilometers from Bama, Borno State. 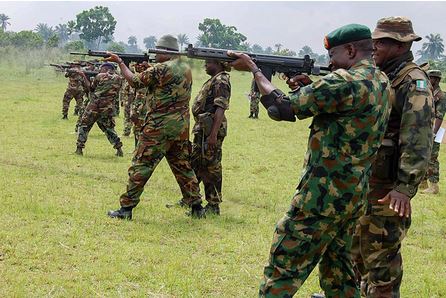 In a statement released Monday by the Director of Defense Information, Major General Chris Olukolade, the military disclosed that at least 56 terrorists lost their lives in an intense exchange of gunfire.

The statement added that two soldiers were wounded in the operation which was meant to track fleeing terrorists.

Major Olukolade the military had acted on intelligence which indicated that the terrorists were making renewed efforts to establish a new camp in the forest locations.

The land and air operations inflicted heavy casualties on the insurgents who reportedly lost both men and material.

According to the statement, “Air and land bombardments are continuing in different locations where terrorists have been reportedly sighted.”

In a separate development, troops of the multi-national Joint Task Force reportedly foiled an attempt by terrorists to carry out an attack on some Nigerian communities.

A military source said that the terrorists were massing up on an island on Lake Chad in order to stage an attack. He said the military’s preemptive strike disrupted the terrorists’ plot.

He added that seven of the terrorists died, with troops still in pursuit of their number fleeing in different direction towards Niger and Chad Republics.

The military source said some of the wounded terrorists were seen in a canoe paddling towards Tumbun Telkandam in Chad.