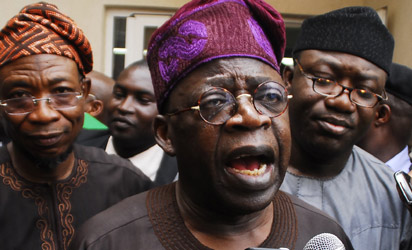 Immediate past governor of Lagos State and National Leader of the All Progressives Congress (APC), Asiwaju Bola Tinubu, yesterday said the party would not falter in its legitimate struggle to “rescue Nigeria” from the “rudderless and clueless” Peoples’ Democratic Party (PDP)-led federal government.

Tinubu, who made this known in Imoru-Ijebu, Ogun State, during the installation of the APC Interim National Chairman, Chief Bisi Akande, as the Baba-Oba of Imoru by Oba Munirudeen Bashorun, said the APC would provide the country with “purposeful and quality leadership” needed to pull it away from the precipice.

According Tinubu, the struggle to rescue Nigeria and place her on the path of genuine development and transformation by the progressives had been on for a long time and can only get better with the addition of five PDP governors to its fold.

The APC National Leader, who is the Agbaakin of Imoru-Ijebu, expressed gladness that the party’s 16 progressive governors cutting across the country are currently joining hands with him and others in the “crusade for a better Nigeria”.

Tinubu said, “We will provide Nigerians with good leadership; once upon a time, Ogun State was on the wrong political corner of this country. Now, we have a purposeful and people-oriented government in Ogun State.

“There was a time I was alone, but today we have 16 governors on a rescue boat. We shall rescue Nigeria as a whole. We shall succeed in this crusade to save Nigeria. As Moses crossed the Red Sea, no going back to Pharaoh again.

“The PDP-led administration at the centre is demolishing democratic structures without any plan to rebuild it.”

While hailing the performance of APC governors in the South west and other parts of the country, Tinubu expressed delight at the scope of massive infrastructural development in Ogun State, which he described as second to none in the annals of the Gateway State.

He said, “Ijebu-Ode is already a giant construction site with the dualisation of roads going on, the overhead bridge, thank you Governor Amosun for your dedication and commitment to duty which made the transformation possible”.

In his acceptance speech, Akande, who was a former governor of Osun State, lauded Oba Bashorun, his chiefs and Imoru people for finding him worthy of the title of Baba Oba, pledging to always work for the growth and development of the town.

Akande noted that the traditional institutions remain the custodian of the people’s culture, history and tradition but lamented that it is now being bastardised by government’s interference.

He, therefore, warned traditional rulers in the country, particularly those in the Southwest region not to be part of the touted National Council of Obas, which he said may not be in their best interest and the institution they represent.