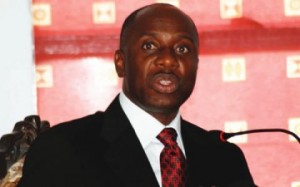 Rivers State Governor Rotimi Amaechi has identified ‘the warm attitude of Nigerians towards corruption’, as one of the plagues militating against the progress of the country.

Speaking in Port Harcourt, weekend, on why he dumped Peoples Democratic Party, PDP, for All Progressives Congress, APC, Amaechi said it was sad that Nigerians celebrate corruption.

“We celebrate corruption. That is part of the problems of this country.”

According to him, his fight was about promoting accountability, transparency in government and good governance, adding that the quality of leadership was part of the reasons he left PDP.

He said he also left PDP when it became clear to him that the President had no development programme for Rivers State.

“The South-South president is the man who feeds me. I had to fight for the work on the East-West Road. The South-South president should have voted money for the road in 2011. Instead of Niger Delta benefiting from his government, we are losing. What has the President done for Rivers State? Our sin for the delay of the international airport is that we are vocal. They don’t like us.

“They took Soku oil wells and 41 oil wells from Etche to Abia State. Should I remain in that kind of party? Virtually everything that was coming to Rivers State had been taken to Bayelsa State. World Bank confirmed to me that they have confirmed the loan for water. You deny Rivers people opportunity to have water in their homes just because they are quarreling with Amaechi,” he said.

He said it was shocking that the Federal Government could ground helicopters it gave approval for the state to acquire to intensify the anti-oil theft crusade.

“That I am still alive functioning as governor of Rivers State is by the grace of Almighty God. They can keep their federal might. I hear they say by the time they finish with Amaechi, he will know there is federal might,” he added.

He also said that the Federal Government was yet to refund money expended on federal projects in the state, adding “We did Ikwerre Road fly over, Interchange at Obikwere, Port Harcourt Owerri Road, Ada George Road. All these are federal projects we have done for which the money had not been refunded.”

Amaechi admitted that the state was facing some financial difficulties traced to diversion, but said Rivers State was not broke.

“We are under pressure but not broke,” he said.