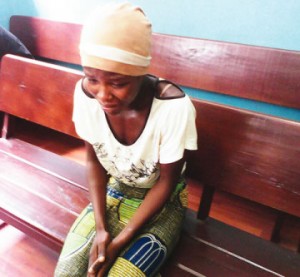 A 20-year-old woman, Titilayo Odedele, has told an Ebute Metta Magistrate’s Court that she strangled her two year old child, Opeyemi, because she could not afford a babysitter for him.

The incident was said to have happened at Ajagunro, Imota Ikorodu area of Lagos.

The defendant, who was arraigned on one count of murder, said she had no one to help her take care of the child after she was impregnated and thrown out of her parent’s home.

Addressing the court in tears, she said, “I only finished Primary six, and I did not attend secondary school before I was impregnated.

“On that Friday night, I attended a vigil and wanted to drop the child there and run away, but didn’t know what to do.

“On Saturday morning, I left the place and wrapped him up in a cloth. When I saw that nobody was with us, I put my hand on his neck and started to squeeze it till he died.”

The magistrate, O.O Olatunji, who was obviously shocked by the defendant’s action, said she could have left the baby in the church for people to take, instead of killing him.

He said, “How did you kill him? Was he not crying each time you pressed his neck?”

She replied, “Each time I squeezed his neck, he cried, but I just kept pressing till he died. I don’t know what entered into me.”

It was learnt that Oladele lost her mother at an early age, and her father got married to another woman. The accused was said to have been sent out of the house soon afterwards.

The investigating police officer, Fatai Popoola, in a remand request, indicated that Odedele was arrested the day after the incident on the road.

He said she had also made confessional statements to the police.

The murder charge read, “That you, Titilayo Oladele, on November 16, 2013 at Ajagunro, Imota Ikorodu, in the Lagos Magisterial District, did unlawfully kill one Opeyemi Ibrahim, aged two years, by strangulating him to death with your hands and thereby committed an offence punishable under Section 221 of the Criminal Law of Lagos State, Nigeria 2011.”

The defendant’s plea was not taken, as she also did not have any legal representation or family member in court.

The police prosecutor, Cyriacus Osuji, applied for her remand pursuant to Section 264 of the Administration of Criminal Justice, Lagos State 2011.

The magistrate granted the remand request and ordered her to be put in prison pending the Directorate of Public Prosecution advice. The case was adjourned till February 3, 2014 for mention.