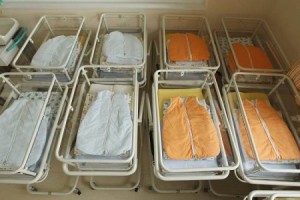 A woman in India has delivered 10 stillborn babies in one night.

A 28-year-old Anju Kushwaha, who live is the Satna district of the Madhya Pradesh province, went into labour just 12 weeks into her pregnancy.

She delivered nine babies late on Sunday night before she travelled over 125 km to the nearest hospital, where she gave birth to the 10th infant.

Her husband Sanjay was carrying with him all the nine premature babies wrapped in a piece of cloth when they arrived.

The assistant superintendent of the hospital, Dr. SK Pathak, confirmed this case to the press:

“She delivered nine of them midway. Obstetric and NICU team at our hospital helped her to deliver the 10th one in the operation theatre – all were born dead at almost 12 weeks.”

Doctors say Mrs. Kushwaha experienced an extreme form of a condition known as multifetal pregnancy, which usually produces twins or even triplets.

However, it is also been confirmed that she underwent fertility treatment, which maybe have contributed to the unusually high number of foetuses.

“It seems that that there was no regular follow-up of her pregnancy after IVF. At least three offspring could have been saved by reducing the pregnancy,” a Senior gynaecologist, Dr. Sumitra Yadav said.

It would be noted The case marks the highest number of babies in a womb ever recorded in India, and the second highest in the world.

In 1971, a doctor in Rome claimed to have delivered 15 babies at once, however none of them survived.