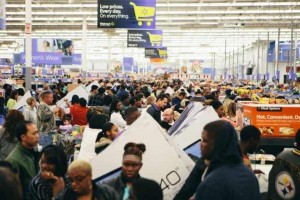 A woman was arrested November 30, 2013 for stabbing to death three shoppers at a Chicago-area Wal-Mart in order to secure the store’s last X-Box One.

Mary Robbins, a married mother of two, reportedly wrestled her competitors to the ground before fatally wounding them with a sharpened Phillips head screwdriver.

The victim’s names have not yet been released, but are said to include a sociology student at Northwestern University, a chemistry teacher at at local high school and a young pregnant woman buying a system for her brother.

Robbins fled the scene and was apprehended at home hours later after police identified her license plates on the store’s surveillance camera. Although many are shocked by the senseless violence, the alleged perpetrator is unrepentant.

“Of course I’d do it all over again,” Robbins proclaimed from a Cook County jail cell. “My little Dustin is going to have an X-Box for Christmas this year. No one can take that away from him. Not even the police.

“Shopping isn’t a hobby for me, it’s a war. So I have to spend a little time behind bars. So what? I didn’t punk out. I fought hard for my family, and I’m proud of that.”