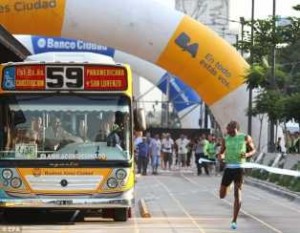 The world record holder or simply put the fastest man in the world — Usain Bolt thrilled his fans and a crowd in Buenos Aires, as he raced against a bus and won.

The bus had no chance against the Jamaican sprinter in the 80m exhibition race as Bolt appeared to take it seriously going in, then began to jog, only to pick up his pace again before crossing the finish line.

Bolt, who won gold medals in two consecutive Olympic Games, in Beijing and London, said he had his eyes set on winning a third time in the Rio De Janeiro Olympics in 2016.

He said, “One of my main goals is to go to the Rio Olympics, as I was saying, to do it again. To defend my titles and it’s never been done three times so, for me, that’s me trying to set the bar as high as possible, just to push the barrier.”

The event was part of a number of spectacles being held as the ‘World’s Fastest Man’ tours the South American country.