A disturbed young man has shocked North America after he tried to kill himself by setting his room on fire while 200 people watched on an online message board. 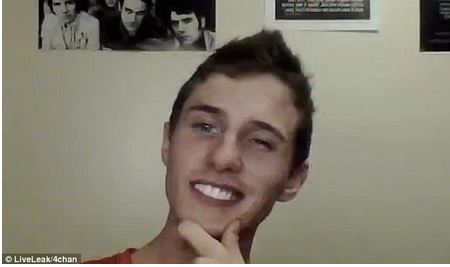 The 20-year-old identified himself only as “Stephen” but is thought to be a student in Canada and announced on the anonymous 4chan that he intended to commit suicide and broadcast the event for others to see.

Disturbingly, scores of online users signed up to watch the suicide attempt and helped the man to set up the video stream for the “an hero” – online slang for suicide attempt.

After 200 users had signed up to his video stream, “Stephen” swallowed a handful of pills and drank vodka lighting a fire in the corner of his room about 7pm on Saturday.

He retreated under his bed as smoke appeared to billow around him. 4chan is an imageboard website allowing users to post anonymously.

“As an oldf*g who’s been on 4chan since 2004, I thought I would finally give back to the community in the best possible way,’ he wrote on the notorious imageboard.

I am willing to an hero [commit suicide] on cam for you all.

All that I request is for you guys to link me to a site where I am able to stream it for you guys.”

“Stephen”, using the name “LOLdoge”, set up a camera to film his suicide attempt.

Strange community: 200 viewers watched as Stephen’s room filled with smoke and firefighters pulled him from the room

Another user set up a video chatroom on streaming website Chateen which “Stephen” joined.

“Stephen” used the username LOLDoge, a reference to a meme featuring a photo of a Shiba Inu dog that is popular on 4chan.

With 200 viewers – the maximum allowed on Chateen – watching him and even more trying to get in, Stephen downed booze and pills before setting his room alight.

The troubling video, still available online, shows firefighters pulling him out of the smokey room.

A number of viewers disturbingly encouraged “Stephen” during his suicide attempt, while others clamored to view the horrific scene.

One wrote: “Let’s all of us use his photo as wallpaper for one week. He’s doing it.”

Another who was frustrated at not being to watch the suicide attempt because the chat room was full wrote: “Leave someone so we can join.”

Another anonymous user wrote:”‘PROVIDE PICS ROOM IS FULL DAMN IT.”

As 200 viewers watched, “Stephen” ingested pills and vodka, lit a fire with his toaster and hid under his bed

The disturbing video captured the moment firefighters pulled “Stephen” out of the smokey room.

It is not known whether he is still alive

It is not known whether ‘Stephen’ survived the fire. YourAnonNews, a Twitter account associated with the hacktivist group Anonymous, reported that Stephen was the fatality in a Spring Garden, Pittsburgh, house fire.

Other users say he is an injured student from the University of Guelph in Ontario, Canada.

According to the Guelph Mercury, one person was injured in a dorm room fire on campus.

CTV reported that the cause of the campus fire has not yet been released but added that the fire department said there’s evidence it may have been set deliberately.

An anonymous user tonight posted their own account of the incident, claiming “Stephen” had taken prescription drugs in his dorm room, cheated on his girlfriend, was disowned by his parents and “in debt for useless degree”.

They wrote fire crews arrived on scene 20 minutes after “Stephen” lit the fire and he is now injured in hospital.

“Stephen” has quickly become the subject of cruel taunts on the messageboard, being dubbed “Toaster Steve”.